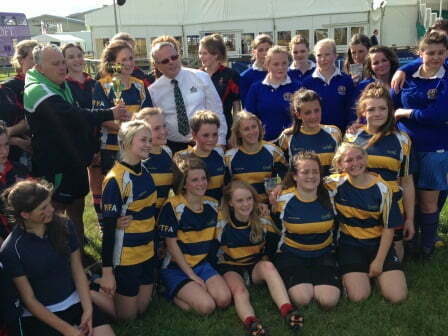 The Clyst Vale girls’ rugby team added yet another trophy to their recent successes of the National 10-a-side Champions and HSBC Rosslyn Park 7’s by winning the U15 girls’ tournament at the Devon County Show on Thursday afternoon.

Clyst Vale, representing the East of the region, along with the schools of South Molton, Tavistock and Teign School, played a round-robin tournament in the main arena of the County Show as part of the Devon RFU showcasing of girls’ contact rugby in the region.

The girls stormed through the group games, beating South Molton (10-5), Teign School (25-0) and Tavistock (25-0), playing South Molton in the final. Unfortunately, in the first of these games, key second-row player Hannah Gregory sustained a knee injury which ruled her out of the rest of the tournament. Despite being a try down in the first minute, the girls recovered to score an equalising try through winger Dionne Courtney in the corner to take the game into sudden death with a ‘next try wins’ format. Through determined defence and strong tackling, the girls gained possession of the ball with centre Courtney Sellick going through a gap in the defence and making a 20-metre burst to the try line to win the tournament for Clyst Vale.

Insight into Syria for Y10