This year’s Annual Clyst Vale Awards were presented at the end of year assembly on Friday, 13th July. The awards for 2017-18 are as follows

For years, I have always enjoyed our Annual Awards as being slightly quirky, but they have always been very true to our ethos, and now clearly support the ethos of a Rights Respecting School. Thinking of, and helping others (Caring Cup), student voice (Citizenship Shield), academic progress (Spirit of Devon), freedom to express oneself (Performing Arts), overcoming challenge and helping others to do so (Tolman May), and personal achievement and fulfilment (Ostler Award). These are all incredibly important themes and values in RRS, so we are celebrating not just the achievements of six young people, but also recognising their contribution to making Clyst Vale a better place. 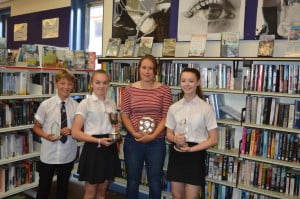