Congratulations to the Year 11 boys’ squad who travelled to London early on Tuesday morning to take part in the biggest Schools Rugby 7’s competition in the World.

The boys were outstanding throughout the two days, both on and off the field, and were a credit to the College. This was typified with great displays and performances, an opening win, a narrow defeat and two bigger defeats against very good opposition, including Ysgol Glantaf from Cardiff, which has produced three British & Irish Lions, including current Harlequins and Wales Centre Jamie Roberts. The boys were never nilled in their four games, registering credible tries, with big performances from pace man Callum Cross, the Boots-Hutchings twins and Nathan Smeath. The only downside of the games was when Jed Wright was led off to hospital in an ambulance with Mrs Elliot due to a badly sprained ankle. Fortunately, Jed remained on tour for the rest of the trip and his injury was not as bad as first thought.

Wednesday brought about a trip to Twickenham to visit the Museum of Rugby and watch the Natwest Schools Finals games  Despite a minibus breakdown hitch, the boys thoroughly enjoyed themselves and were exceptional throughout. 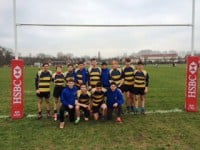 No Coasting on Path to Duke of Edinburgh Awards…