Well done to the Clyst Vale U13 girls’ contact rugby squad which has made it through to the South West Finals, a feat achieved at this age group for four years running! 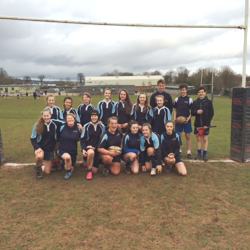 The girls, who were led by Y12 student Annalise Cocking, herself a National Winner at U15 level in 2013, won their original group, leading onto the Cup pool where they eventually finished runners up to Kingsbridge Community College. They posted results of 6-3 and 5-4 wins over South Dartmoor and Park School respectively, but suffered a heavy 5-1 defeat against Kingsbridge. This ensures that the girls go through to the South West Finals Tournament on 20 April at Weston Hornets RFC. Let’s hope the girls train hard and gain some good results against some very strong sides.

The U15 girls, led by Captain Rosie Martin, again won their group in the Devon Finals but unfortunately came off second best in the second round, losing to some very strong sides of the likes of Kingsbridge, South Molton and QE, Crediton. The girls performed really well, despite the lack of Maddy Ross and Amelia Hopkinson from the sides due to commitments with ‘Into the Woods’.