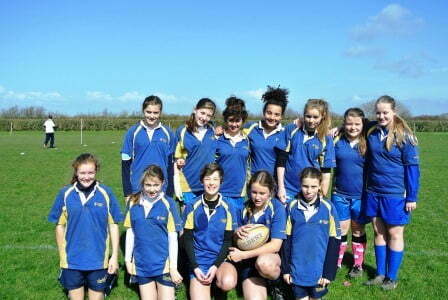 Following qualification at the Devon round on 7 March, both squads represented Clyst Vale at the Regional Finals, held at Burnham-on-Sea RFC on Tuesday 25 March. The winners of each pool go through to the National Finals and then onto Twickenham as last year’s squad experienced.

The U15 team, which included several members of the squad which won at Twickenham last April, were placed in a tough group consisting of the two U13 finalists from last year, Dene Magna and Kings of Wessex schools, both of which are essentially strong club sides from around the Bristol and Gloucestershire area.

The Under 15’s finished 3rd in their pool, winning two of their four games with the following results:

The U13’s had some relatively new faces in their squad and found it tough against some established club players at regional level, losing all of their pool games but winning one of their second round games. Despite losing Captain Maddy Ross to injury, they soldiered on to play with an excellent spirit and dedication.

An Unusual Use for Cake…

Graduates of the ‘Unlocking Potential’ programme