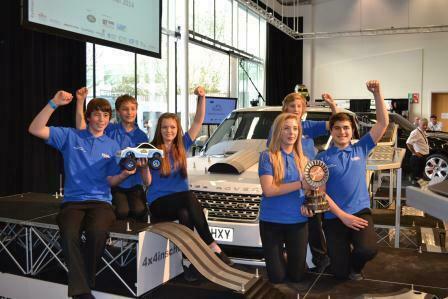 Huge congratulations to our 4×4 team who have been crowned national champions at the Jaguar Landrover 4×4 Schools Challenge. This is an amazing achievement, as the competition involved literally thousands of schools competing on a regional basis. Having won four trophies at the South West Regional Competition in January, our team was confident of doing well, but were competing against 25 others, including Sixth Form teams and teams from independent schools. The national finals were held at the Jaguar Landrover Design Centre, Gaydon in Warwickshire.

It is an incredibly demanding competition: students designed, built and modified the radio-controlled car. Each team member has to navigate round a very challenging obstacle course; in the final this was constructed around, over and through a full-size Landrover. They have to create a “pit-stop” display board, and make a ten-minute presentation to the judging panel. The judges, who were all high-level engineers from Jaguar and local companies, then interviewed the team.

And they won ! Mr Hewlett also won the award for Teacher of the Year, deservedly because of the many hours spent with the team developing the car. There are so many positive things I don’t know where to start. The students have been fantastic, and have developed a brilliant sense of teamwork over their time together; they have the same goal, can cope with differences of opinion without falling out, and have overcome all sorts of technical obstacles. The range of skills is impressive: designing, engineering skills, presentation skills, having the confidence to speak in public and to experts. We have had tremendous support from Flybe, who have been very generous in providing an engineer to advise and improve the team’s marketing, and financial support from ExIST which was invaluable in buying components to improve the car.

It has been an absolutely wonderful 24 hours, and I am so proud of the team. Clyst Vale has long been committed to the STEM agenda, and it is just brilliant to have it recognised. Even better, the team have made engineering “cool”, and have been very well supported by their friends in College.