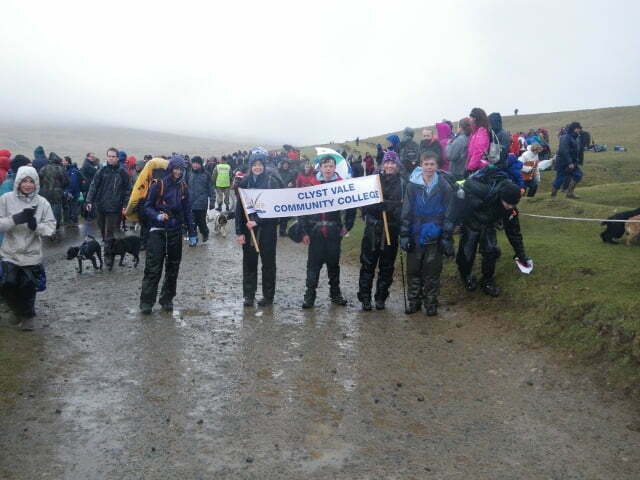 It was the annual Ten Tors challenge on Dartmoor on the weekend of 11th – 12th May 2013 and what a contrast it was to the glorious weather the weekend before for the Bank Holiday!  Some staff went up to Okehampton Army camp on the Thursday before but the high winds and rain slowed progress somewhat setting up basecamp.  Six Year 10 students and six Year 11 students came to the camp on the Friday to prepare for the challenge, and the high winds and rain eased, at least for the Friday morning.  They spent the remainder of Friday queuing for Scrutineering (kit check) and attending the mandatory safety briefings before planning the route the Army had assigned to them.  Then the rain started again, along with the high winds, about 5pm on Friday and never really stopped after that.

It was up at 5am on Saturday, to get ready for the start of the challenge at 7am, with winds, rain and now to add to it there was very thick low-level mist which would make navigation extremely challenging.  But shortly after 7am, 2,400 participants ventured across the start line and out into the wilds of Dartmoor.

Nothing’s ever easy on Ten Tors at the best of times but the low mist made the conditions hard going, some were saying they were the worst they had seen in the last 9-10 years.  All the rain over the preceding night also meant the rivers had risen significantly and so, as a safety measure, Dartmoor Search & Rescue group personnel were deployed along the key rivers guiding all the teams across at safer crossing points.  This also often meant a significant detour from the planned route which affected the timings but it meant the event was safer which has to be a good thing.

The Year 10s, doing the 35-mile route, had a similar route to the one they had done on their last training weekend only 2 weeks before, but they all did very well and got back to the finish line just before 2pm on the Sunday.  They were welcomed with great applause despite the rain and wind which started at 10am that day and never stopped, after which they were presented with their medals and a well-deserved pasty to eat.

Unfortunately the Year 11s, doing 45-miles, had a tougher time of it, and not just because of the longer distance.  Their route took them east from the start to find Hound (not easy at the best of times, let alone in dense mist and rain) then south to Sittaford and on to Combestone, Hartor and more.  The leg from Sittaford to Combestone was long in distance and time, made even more so by one of the two maps getting mislaid, and the team being turned away from their planned river crossing site at the stepping stones which meant a 1½ hour detour by road.  One of the team pulled out at Tor 3, Combestone, on Saturday evening and entered the fall-out system to return to the Army camp.  The rest of the team camped overnight but in the morning pulled out of the challenge due to a combination of factors.  They were not alone, and all credit to them for trying; approximately 500 participants from 2,400 starters also failed to complete the course.

Well done to all who took part in the challenge! The conditions this year were very difficult, so to make it round the course, and even to take part, is a fantastic achievement!