Clyst Vale were looking to add to their recent win against Haygrove by beating Millfield. The game started well with the hosts pinning Millfield back in their own 22, the pressure paid off with Millfield giving away two well earned penalties which Dom Ditchburn had no trouble kicking over. With the score at 6-0 CVCC turned the screw and with Fionn Wright gaining great metres and some handy work on the ground by George Wheatley CVCC added a try coming from Joe Hooper. Millfield weren’t going to give up, fighting back to score a controversial try making the scores 11-5. After half time there was only one side in it and that was Clyst Vale. Millfield couldn’t handle the power and strength of the Clyst Vale team and to add to the earlier score captain Ross Watts went over for a try, following some outstanding footwork from Dan Hooper. A great all-round, team performance, with Duncan Ogilvie leading from the front row, with great carries and Ditchburn and Pugsley orchestrating the back line. So another great win for the CVCC boys, the game finishing 16-5. 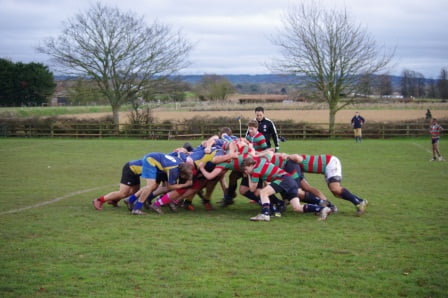 A very big well done to all the Year 10 boys who represented Clyst Vale in their rugby match against Millfield School on Wednesday afternoon. It was apparent right from the kick off that Clyst Vale were keen to dominate in every aspect of the game. The tackles were accurate and powerful, the ball retention determined and thanks to some great work from the forwards the rucks and mauls were often turned in our favour. Olly May showed exceptional strength and skill to win countless breakdowns feeding the ball to the ever present James Vanstone at scrum half. Indeed it was Olly who ran in the first try after only 9 minutes which Dom converted; two of 10 points from his boot. Jacob crossed the line next in typically bullish fashion, followed by Ollie Hughes and Jacob again before half time. The boys were determined not to let up in the pace and style of their play in the second half and great running from Henry, Harry, Josh and from full back Cam Walker ensured little respite for the Millfield side. Shahin popped up with a try in the second half, followed by a flying try from Jordan on the wing. Well done on representing the College in such a positive manner, both on and off the pitch.

College to Close at end of Friday