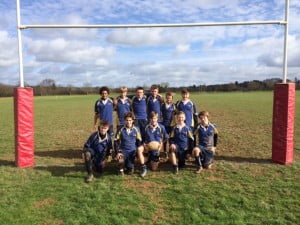 Earlier this week the boys travelled to Blundell’s School. The boys and Mr Pearce had high hopes for the tournament as the Y8 boys possess a lot of size and speed which is very dangerous in the small sided version of the game.

Being placed in a group with County Champions Uffculme School did not bode well.  However a last minute try secured a 19-19 draw which set up a straight shootout against Colyton to see who could score the most points to secure top spot in the group. A 38-0 victory ensured that Uffculme had to have a play off to reach the final pool of four teams. They duly did so and Clyst Vale went on to beat local rivals, St Peter’s 19-12, Sidmouth 24-5 and had a 28-5 reverse against Uffculme who won the tournament and area.

The squad of 11 students did exceptionally well to finish runners up and through skipper, Ben Parsons, went through to the Devon Finals, hosted by West Buckland School, which was unfortunately cancelled due to the poor weather this Wednesday.

In the afternoon, it was the older boys’ turn to take the reins, with the Y10 lads working hard all afternoon in their four games against Exmouth, Blundell’s, Okehampton and Cullompton.

The first game began with an early score by James Coles, which was soon cancelled out by the opposing Okehampton team. This was followed by a further two scores by the opposition to inflict a 19-7 defeat on Clyst Vale.

The next game saw a huge improvement against a strong Exmouth side, with a score from Chris Perry on the wing, despite a 12-5 defeat.

The Cullompton Community College game was the highlight of the day for the squad, with a narrow 15-12 win coming with a late try from Tom Bradner.  Not a 7’s classic but a good try nonetheless! This was a sweet win for many of the boys who play with the Cullompton lads at Cullompton RFC Under 15’s. The last game of the tournament ended in a big defeat against eventual winners, Blundell’s School, but the lads never gave up, showing heart and determination.

A big thanks to Phil Madams, father of John, who helped out with the running and coaching of the squad, which he has done in the past. It was much appreciated. 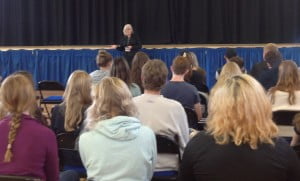