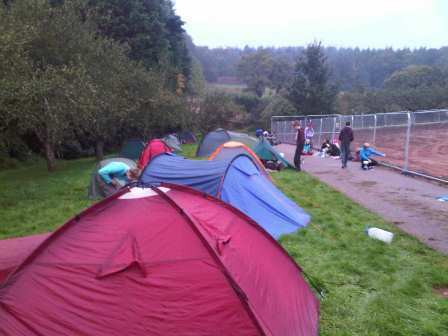 As with all good things in the great outdoors, weather can play a major part and true enough it started raining at 4pm on Friday just as we were about to begin!  But by the time the ten students had reached the start point (and thanks to Mr Forbes for driving them in the minibus there and back) the rain had eased off.  These students from Clyst Vale, along with two students from Exmouth who joined us, were attempting their Silver Practice with three days and two nights of camping.

The campsite was quiet but cold and very windy, and with great teamwork the girls beat the boys in getting their tent up first.  There was an interesting array of tents along with a mixture of stoves on which they cooked their dinner.  Over dinner there was a racoon hat that looked nice and warm, a Chinese style lantern and one student even had their ‘going-out’ outfit on.

Saturday morning saw the Silvers continue into Day 2 of their expedition, whilst across at Sidbury 34 Year 10 Clyst Vale students, plus four students from two other local schools, and Miss Haynes, Mrs Battishill, Wayne Battishill, James Kelly and Graeme Robb gathered for the start of the Bronze Practice expedition.  It was perfect walking weather (bit of drizzle, a chilly but sunny day) and, after checking everyone had the key bits of safety gear, the groups set off on their expedition at staggered intervals.  They had all departed from the start by 10:30am and, after a few little detours early on, the last group passed the Donkey Sanctuary by 13:10.  Spirits were high with many groups singing as they went along, and climbing many steps up many big hills to meet Miss Haynes, James and Graeme at the top, whilst another group took an unplanned route along the beach!

Camp for everyone that night was at Bicton with the Silver group arriving just after lunch having completed their route in record time. This meant they had lots of time to chill out at the campsite.  The Bronze groups all did fantastically well with one group coming into Bicton at around 2:30pm and the remaining Bronze groups following, with the last group coming in at around 6pm.  The Silver group helped the last of the Bronze groups to put their tents up and students then spent their time cooking a well-earned dinner.

So all in all a great weekend! The students did very well in their groups: there were blisters and sore feet, and one student with a ‘huge’ bug in his eye! Many were tired after walking eight hours on the Saturday, with heavy packs weighing around 15kg full of all the kit they would need, but they all rose to the challenge and successfully completed their expeditions.

The assessed expeditions are next April and June so students can now concentrate on the other Award sections of Skill, Volunteering and Physical over the winter months. We will be meeting the groups in their regular lunch time sessions in January to help them plan the actual expedition routes. These have to be sent off to the Award Panel for checking so must be of a very high standard.  We will be sending letters out nearer the time with dates, costs and kit lists.