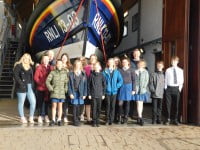 On Monday 11th November a group of 14 students went to the RNLI Exmouth. We were invited to have a guided tour of the lifeboat station and to see the new Shannon Lifeboat.

We were able to hand over £170 to the RNLI from our competition and cake sales on 22nd September 2019. We were also thanked for our 2018 fundraising efforts for the RNLI which was our best year ever at £997. As the RNLI relies entirely on voluntary donations our fundraising efforts were praised by the RNLI and all of the students enjoyed a wonderful afternoon at Exmouth.