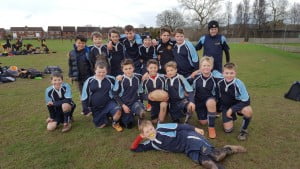 Congratulations go to the Year 7 boys who competed well at the recent U12 festival at St Peter’s School, Exeter. Despite a tough day, they battled well and continued to grow their rugby experience, gaining the following results:

Congratulations to the U15 girls who progress to the Devon Finals at Topsham RFC on Wednesday 1 March, losing only one game in six. The girls played really well as a squad, gaining a lot of plaudits from several coaches and teachers at the event. Results were:

The Year 9 lads finished runners up at a local fixture last Wednesday at St Peter’s School. In a warm up for their upcoming attendance at the Rosslyn Park Rugby 7’s tournament in London, the boys did well to beat Tiverton and St Peter’s B comfortably, however lost narrowly to St Peter’s A 10-7 in their first game.