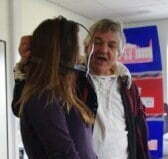 The student in the photo is wearing a scold’s bridle, used commonly in the 17th Century and part of Year 8’s day learning about the English Civil War and life in 17th Century England. This intensive ‘Civil War Day’ included inputs on warfare and weaponry, the work of the barber-surgeon, punishment, and domestic life including medicines and the plague.

Year 9 took part in the very powerful and thought provoking ‘Day of Difference’.  After an apparent ‘fun’ activity creating tribes and establishing how easy it is to develop prejudices, students meet real people who have faced and overcome real prejudices in society.  One visitor sold everything to gain a university degree from Britain, because ‘Britain has the best universities and the best education system in the world’, and he cannot believe how young people take this for granted.

Year 10 students met other visitors who had each overcome either drugs, alcohol or self-harming issues.  This was delivered by the ‘Five Lives Schools Project’, and is another legacy of the Character Education Project.  Students were gripped by the stories – as one said to me, “These are real people – it’s so much better hearing from them than from teachers or watching a DVD.  It makes you realise that this stuff really happens to ordinary people.”.