Congratulations to Slovakia from Green School, who won the boys’ competition on Friday lunchtime, defeating previously undefeated Poland (Red) 3-1 in the final.

Led by Y10 skipper, Rhodri Winter, they had a less than comfortable route to the final finishing joint top of Group B alongside Wales, with one win and two draws, then having to replay their lightning postponed game versus Italy on Thursday lunchtime, just before their penalty semi-final win over Ukraine. The final, however was a more convincing 3-1 victory over Poland, who finished runners up in their pool and won a dramatic semi-final with a golden goal over very fancied Yellow School Sweden, led by the well renowned Director of Football, Mr Endacott.

The week’s tournament was fantastic, following on from the Inter-School Touch Rugby World Cup in 2015, with students able to co-operate and work together from Years 7 to 10. Throughout the week all students were considerate, respectful and fair towards one another and officials, reinforcing the values on which we pride ourselves at Clyst Vale.

A big thanks must go to the Y12 officials, the PE department and to Mr Endacott for again being the Guest of Honour on Finals day. 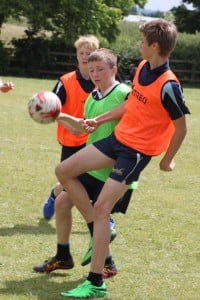