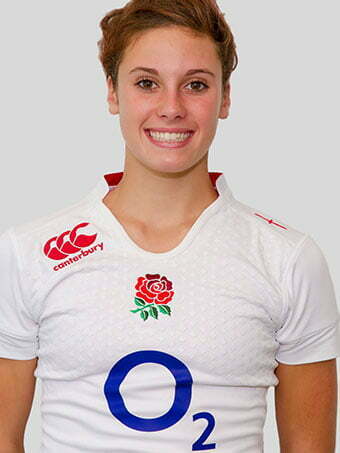 Former Clyst Vale student Abbie Brown has been selected to play against Wales in the England Women’s opening Six Nations clash versus Wales on Sunday in Swansea. It is a magnificent achievement for Abbie who, at only 18, is one of the youngest players in the World Champions squad and gains her first senior cap following debuts for the Under 20 squad earlier this season.

It is worth knowing that Abbie started her rugby playing career at Cullompton RFC whilst continuing to play for Clyst Vale’s boys’ side up until Year 8, leading her team to several tournament victories. She has gone on to play for Exeter Saracens, Worcester and Bristol Ladies whilst studying on a Higher Level BTEC Sports Course at Hartpury College. Abbie is going on to Bath University this summer.

Abbie starts the game at Outside Centre and will hoping to get her team off to a victory and on course for the Grand Slam.

A link to the RFU website is below where you can listen to an interview with Abbie and the squad in the build-up to the game, which will be shown live via the BBC Wales Website at 2.30pm on Sunday.

We wish Abbie all the very best and watch with great excitement.