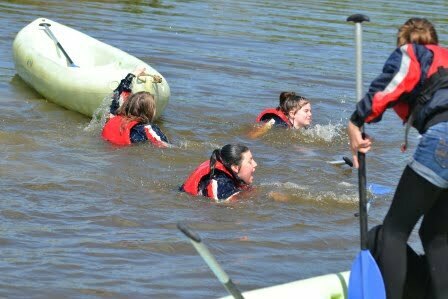 During half term we took a mixture of Year 9 and 10 students to Adventure International in Bude. Most students had already been there at least once, with some loving it so much they decided a third time was needed. We set of on Sunday with very high spirits and lots of very excited pupils waiting to see which instructor they had for the week, and they were all pleased to find we had been lucky to have been given some very good ones.

After a very long evening/night for some (those who did not want to sleep) students were woken by the bell which meant a very early morning run or swim. The activities followed – canoeing for some and mountain boarding for others. The groups were spilt into four tutor groups, the small group sizes meaning the students were able to get the most out of all activities. The week continued with the same morning bell and two daily activities. These included surfing, climbing, abseiling (for some), kayaking and body boarding. The evenings were spent either showing off their singing talent or just any talent they happen to have, some fancy dress and some socialising with other schools.

The week finished with a presentation at which awards were given out. Superstar went to Toni Rowley who unfortunately injured her hand in the very first activity but completed the week without complaint and was a joy to be around. Our Wally of the Week went to Kia Mearns who not only kept her team amused but kept the whole school amused including myself. She even asked if Bude could filter the canal, as it was too dirty (this of course went on our feedback form). Our Bottle of the Week went to Steven Dodd who was on this trip for the first time. Even though he had many fears he tried his best and attempted everything. These awards could have gone to any one of our students due to their personality and commitment throughout the week.

Throughout the week the students were amazing and I could not have asked for any more. I was proud to be with them, and the way they behaved was a credit to all parents.