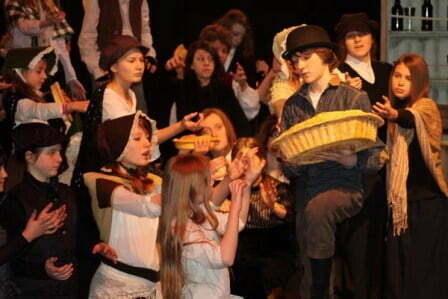 The first night of Sweeney Todd was a resounding success, and I hope that you all have bought your tickets! It is a challenging musical, performed entirely by students from Years 7 to 13, and I’m not aware of any local schools which have had the confidence to stage a school production in a public theatre. The amount of time and effort which has gone into “Sweeney Todd” is phenomenal, and the best “thank you” is to come and watch: the cast, the orchestra, the crew, the backstage team, those responsible for the set, props, costumes and special effects (yes, theatrical blood…). Performing in a real theatre is a fantastic experience for all involved, but it is also better for the audience.

I had the privilege of being backstage, and was able to see the superb way in which the cast responded to the challenge. They were incredibly enthusiastic, self-disciplined, supportive of each other, and coped well with the inevitable little hiccups which the audience never see.

Using the Barnfield has meant slightly higher ticket prices: however, come and see for yourself, and you’ll agree that it’s worth the extra pound or two.

Clyst Vale in the News!