Four Year 7 students have each written one of only 18 short stories shortlisted from 174 entries in the Exetreme Imagination Festival Short Story Competition, which has been organised by the Devon Arts in Schools Initiative (daisi).

Entrants had to write a story of 250 words based on the topic of a frosty winter’s morning.  As you can see from the comments below, the judges were very impressed!

‘Luke’s Radio’ by Kit Boothroyd.  “The story showed excellent originality – a visionary radio! Great plot and a good twist. A potential crime writer, after my own heart!”

‘The Thousand Pound Note’ by Luca Assante.  “The story showed wonderful originality – the best by far. Good focal awareness. An insightful commentary on modern life, remarkable from someone so young!”

‘The Truth Behind Jack Frost’ by Sam Robinson.  “The story was highly imaginative, with a fantastic ending. Really loved the idea and title!”

‘Grim War’ by Joseph West.  “The story showed striking historical perception and sadness in understanding the past. A very moving, vivid story.”

Pictured below, holding the congratulatory letters they received from daisi, are the four students (from left to right) Kit Boothroyd, Luca Assante, Joseph West and Sam Robinson. 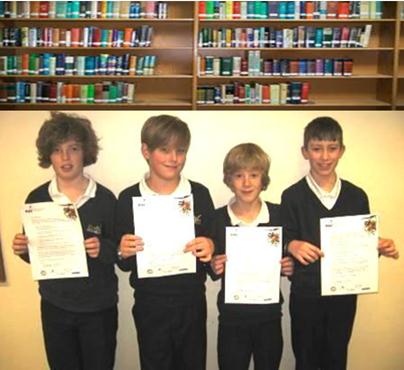