Congratulations to the 12 U15 girls which represented the College at Exmouth Community College on Wednesday evening. Playing on a synthetic 3G surface, the girls took a while to get to grips with the demands of the game, falling behind to three very quick tries by two very strong Exmouth girls. Despite this, the girls responded very well with tries from Lenni Bashford and Ellie Bradner, using their superior strength to power through tackles. The girls were reinforced after half time, with Lauren Elliot leading the charge with some powerful tries, runs, tackles and astute rucking. Becca Nisbett ran well and worked tirelessly throughout, Rowan Greaves tackled superbly well on some very tall girls, Rachel Champion used her speed efficiently and Fay Beer was solid in the centers. Eloise Blatchford scored 4 tries in succession, with the best game she has had whilst playing for the school. Daisy Norris showed sublime hands to release many runners for scores, with Chloe Elliott adding much needed bravery and Chloe Walker illustrating superb catching skills off kick offs and good physicality.

Overall, the Clyst Vale girls shaded the match, winning the game by a couple of scores, however the girls were excellent and once again, progressed their knowledge and experience of the game massively in this fixture. They must remember to push on and to train every Monday lunchtime in preparation for the area festival on March 2. 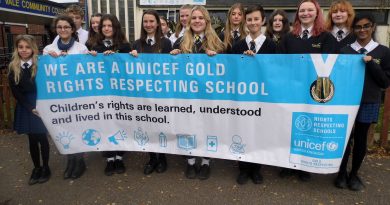 A Golden Step on a Journey