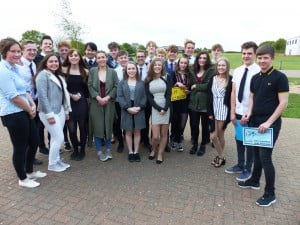 Our recent 6th Annual Sports Awards Evening was very successful and extremely well attended by over 100 students. Students from Years  9 – 11 came along and all dressed smartly for the occasion. Our guest speaker for 2017 was our very own CVCC ex-student Kelsea Purchall who is now a full time professional athlete for Team GB Bobsleigh. Kelsea spoke with great admiration for her time here at Clyst Vale and thanked teachers for their support. She was always a determined character from Year 7 and put that determination into so many sports here at Clyst Vale. She spoke very professionally about her travels to different countries and life away from home as a GB athlete. She kindly brought in her Bronze Olympic medal which she won in Lillehammer, Germany, in the Youth Olympics. Kelsea gave an honest and inspirational account of her sporting career so far, and started the evening off tremendously.

The evening then moved on to individual sports, each coach talking about their teams’ successes this year, giving out awards for performance and progress for each team. Students listened to all the teachers with respect and empathy for every sport and the successes of others.

The final part of the evening featured the Sports Awards when full and half colours were awarded.  Students admire these from afar in the hope of achieving them as they move higher up the school.

The awards are discussed at length by the PE department and are awarded to  students who have shown full commitment to one or more sports.

The penultimate event was the PE Department’s award for the Young Ambassador of the Year. The nominations were discussed at length by the PE department and the final nominations were Rosie Martin, Jake Faulkner, Jess Pascoe, Chris Perry, Paddy Gray, Tom Bradner and Maddy Ross.  The winner was Tom Bradner.

The evening ended with everyone wishing the Year 11s the best of success in their exams and their sport pathways of the future. As a PE department this is an evening which makes us immensely proud to share the success of our teams and individuals with others.

Another great evening was had by all.