Congratulations to all of the girls who took part in the match on Tuesday lunchtime which illustrated the last four weeks’ work of rugby in lessons. The game ended in a 25-all draw, with Lauren Elliot scoring four tries in total, two for each team as the Red team were shorter on numbers! Other tries were scored by Emily Ferdinand, Becca Nisbett, Laura Goss and Rowan Greaves. The game was played in excellent spirit and determination and helped by Year 9 officials and coaches: Rosie Martin, Sophie Guy, Jess Pascoe, Tom Bradner, James Wu, Paddy Gray and Chris Perry. The girls need to prolong their success by attending Rugby Club on Wednesdays after school, continuing after the Christmas break. 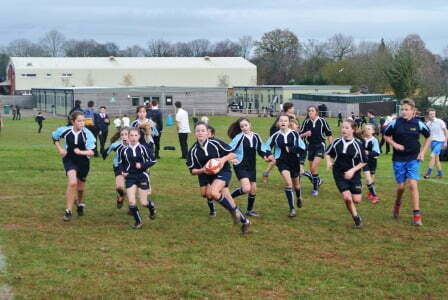 On Wednesday lunchtime, it was the Year 8 girls’ turn to go head to head in PE groups. The game was a much tighter affair, with the Blue population running out 10-5 winners, with both tries scored by Captain Grace Ford. The game was excellently officiated by Year 10 lads Jack Vicary and Sam Chambers, with Year 8 Tom Price running the line. The Red population captain Lauren Harker grabbed a try back late in the game for her team, but unfortunately time ran out for before her team were able to get a draw. It really was a great turnout from both girls’ groups and highlights the high amount of ability for the game in this age group. It also bodes well for the future with a significant amount of girls playing outside of school for Exeter Saracens.

Well done to both squads:

During the wind and rain at Rugby Club on Wednesday after school, the Year 9 boys pressed on with an excellent game that went narrowly to the Red population by 22-15. Despite being pretty much dark before kick off, the lads played with fantastic spirit and attitude and really enjoyed the run out. Red Captain Tom Bradner skippered the side well and led from the front as always with tries from Rafael Piccoli x 2, Rhodri Winter and Connor Hepburn. The Blue side, skippered by Chris Perry, scored tries through James Wu (credit to swapping sides due to numbers), Louis Cocking and Joe West.

Well done to all of the squad: