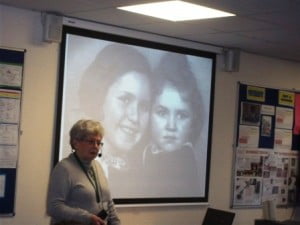 On Friday 29th January we were fortunate to have a visit from Lady Milena Grenfell-Baines.

Lady Milena is one of “Nicky’s Children” rescued from Prague in 1939 by Sir Nicholas Winton. Sir Nicholas rescued 669 children as the Nazis occupied Czechoslovakia. Milena was 9 years old when she left Prague on the last train to leave with refugee children on 31st July 1939. She was told by her mother to look after her little sister who was then 3 years old.

Milena showed our students the cardboard tag that she wore around her neck on that journey. She also showed us her copy of “The Wind in the Willows” in the Czech language that she brought with her.

Her story is one of courage and the kindness of strangers. The family who looked after Eva and Milena in the UK became surrogate parents to the two little girls, and Milena and Eva called them “Mummy and Daddy Radcliffe”. Milena met Sir Nicholas Winton in 1988 when his story was told on the BBC “That’s Life” programme. She saw him often and she and other “children” visited him regularly until his death in 2015.

Milena’s grandfather, cousins and extended family were all killed in the holocaust. Her visit in Holocaust Memorial Week was a very poignant message to all Clyst Vale students about the horrors of that genocide.