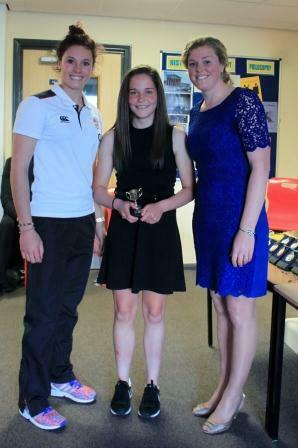 On 29th April we held our fourth successful Sports Awards Evening. The prestigious invitations went out to the Year 9, 10 and 11 committed squad players and around 100 students.  The evening kicked off with our guest speaker, an extra honour for the PE Department as this year we welcomed former student Abbie Brown who now plays for Bristol and the England Ladies Rugby Team.  Abbie is currently at Hartpury College whilst she is training with the England team.  She spoke about being part of the England Squad, her experience in the Six Nations and the pathway to where she is today. It was an honest and inspirational talk which truly engaged our Year 9, 10 and 11 sports teams.

The evening was then handed over to the PE Teachers who spoke about their teams’ season and successes. Certificates were given out for the Players’ Attainment and for the players who had made the most progress, and full and half colours were awarded to Year 10 and 11 students on the basis of commitment to a squad across their time at Clyst Vale.

The final accolade was the Young Ambassador Award. This is the pinnacle of the evening and always prompts heated debate within the PE department, and speculation among the students. It goes to a student who is viewed as a natural role model for the PE department, a student who has achieved success in their sport and is a dedicated team player. The students nominated for this award were Annalise Cocking, Anna Thurley, Molly Baker, James Tapp, Will Radford, Harri Tapp and Reece Jordan.

The overall winner was Kate Finch (pictured left with Abbie Brown and Mrs Broomfield), a popular choice among staff and peers, who was greeted with a great cheer from all present.