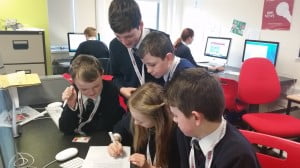 As the school bell rang 9.00am, twenty-nine KS3 students were tasked with the mission to write, film and edit eight news stories as part of the BBC School Report project. Thanks to the hard work of teachers and students, almost all the reports were published on the BBC News website before the 3.30pm deadline.

Whilst students in the previous five years of the BBC School Report project focussed solely on local stories, this year saw reports ranging from the national NHS crisis to the revocation of Carmel’s school bus licence in 2014. Other reports included the build-up to the May General Election, the increase in the development of technology and whether Exeter needs new swimming facilities. Yet, after a vote at the end of the day, the students decided that a Year 9 report about the integration of multiculturalism into society should win the prize for the best story, due to its original camera angles and use of subtitles. All of the reports were introduced using the BBC News ‘sting’ theme tune, which gave them an air of professionalism, and can all be viewed by following the BBC School Report hyperlink (https://www.clystvale.org/blog/schoolreport/bbc-school-report-2015).

As the students had only six hours to complete the stories, time-management and organisation proved to be key in order to meet the deadline. For example, 7GTGa’s Millie-Jo split her group into “Camera Man, Editor and On Screen News Reporters” to ensure that her team’s report was published with time to spare. Other students learnt about the importance of selecting “relevant interviewees”, how some ‘pieces to camera’ can be “filmed beforehand” and how not to “trip down steps” on cold days; techniques used by professional journalists on a daily basis. At the end of the day, the variety of news stories created were educational as well as entertaining and all fulfilled the essential BBC value of impartiality.

Due to the school’s close contact with the BBC, we once again welcomed Spotlight’s Simon Clemison to give a talk about professional journalism to the budding reporters in the weeks running up to the day. Simon then helped film and edit a report about the closure of libraries in the South West with five students from Year 9, which was aired live on BBC Spotlight today. Megan, Bea, Grace P, Hattie and Grace F spent Wednesday filming with Simon and then watched the report as it went out from the BBC Spotlight studios in Plymouth.

The BBC School Report project is aimed to encourage young people to explore the world around them by helping them to investigate key issues that intrigue them. In my opinion, the day (organised by Ms Haynes) fulfilled this brief and perhaps inspired some students to become the next on-screen journalists. 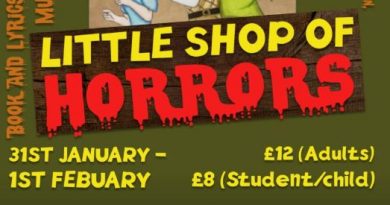