On Wednesday and Thursday in the last week of March, the Y11 rugby squad travelled for an overnight stay to London for their long awaited trip to the well-known and respected Rosslyn Park Rugby 7’s Competition. It is a national event and has been running for many years, with CVCC’s debut appearance being an excellent one.

Despite an early start, leaving CVCC at 5.30am on the Wednesday, CVCC achieved two wins and two losses, finishing 3rd from 5th in the pool, something not to be sniffed at considering the high standard of rugby during the event.

CVCC’s wins came against Bryanston College (26-12) and Audenshaw School (19-12).  The picture below shows Fionn Wright going in to score one of his hat-trick tries against the latter. 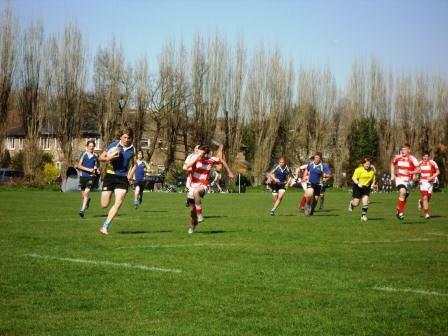 The two defeats came against strong public and grammar school competition, narrowly losing out to The Oratory School (28-12) and Lancaster RGS (22-7).

The two-day tour culminated with a tour of Twickenham stadium in all its glory, going to the changing rooms, the pitch and even the royal box.  The 19-strong squad must be commended for their attitude, maturity and behaviour over the two days.  Representatives from the hotel and Twickenham staff commented on how exceptional they were.

Well done to all the squad: